Don Valley Village is a Toronto neighbourhood that is located in the North York area of the city. The neighbourhood’s boundaries are Sheppard Avenue in the south, Leslie Street in the west, Finch Avenue in the north and Highway 404 in the east. The area has a variety of residential properties, from single family homes to townhomes, apartment buildings and condominium. It also has several commercial areas and shopping malls, the largest of which is Fairview Mall at Don Mills Road and Sheppard Avenue. 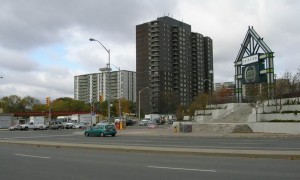 In September 2010, shots were fined in connection with a robbery at Fairview Mall. From City TV:

Officers allege 27-year-old Christopher Alexander and another man stole a bottle of cologne from The Bay at Fairview Mall shortly before the 9pm closing time on Monday. A security guard confronted them outside the store and one of the suspects allegedly pulled out a gun and fired in his direction.The guard was not hurt and neither were the dozens of shoppers nearby. The pair fled and police recovered a gun in the shopping centre, near Don Mills Road and Sheppard Avenue East.

Also in November 2010, three men were shot outside the Peanut Plaza near Don Mills and Sheppard Avenue. One man was killed in the shooting. From The Toronto Star:

Peanut Plaza, on Don Mills Rd. north of Sheppard Ave. E., was closed for a police investigation overnight after shots rang out inside a pub and outside in the parking lot of the strip mall just before 3 a.m. on Saturday.Paramedics transported two men to hospital, each with non-life threatening gunshot wounds. A third man was pronounced dead at the scene. Police say several patrons inside the bar became involved in a fight and one of the patrons pulled out a gun, firing several shots before escaping.

Shots were fired during a bank robbery in the Sheppard and Leslie area in October 2010. From CP24:

Toronto police Const. Tony Vella says three masked men walked into a Bank of Montreal branch near Sheppard Avenue and Leslie Street at about 11:45 a.m. One man was carrying a gun, which he used to fire at least one shot, police say. The shot didn’t hit anyone, but one teller sustained minor injuries after being pushed by one of the men.

For more information on security and details on how you can receive a free risk assessment for your home, please contact SafeTech Alarm Systems today. We have been protecting people and property for more than 20 years.Don Valley Village Crime Report Safetech Security article @ 2012