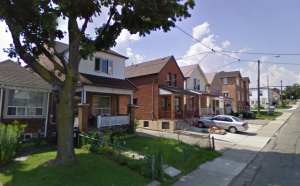 In January 2012, a man was shot near Earlscourt Park. From City TV:

Police are investigating after a man was shot on St. Clair Avenue West early Thursday near Earlscourt park — the city’s third shooting in less than 12 hours.Emergency crews were called to the scene on St. Clair Ave. W. near Caledonia Road around 4:30 a.m., where they found a man, said to be in his 20s, suffering from a gunshot wound to the abdomen. He was rushed to hospital in critical condition.Authorities shut down a section of St. Clair West, between Old Weston Road and Spring Grove Avenue, for the investigation. But it has since reopened.

In July 2010, a teenager was stabbed near St. Clair and Dufferin. From the Toronto Star:

In May 2010 a couple in their 80s was arrested after a shooting on Boon Avenue, near Dufferin and St. Clair. From CBC News:

A bizarre incident in Toronto on Thursday morning has ended with a couple in their 80s in police custody and their neighbour in hospital recovering from a gunshot wound.Multiple shots were fired on Boon Avenue, near Dufferin Street and St. Clair Avenue West, just after 9 a.m., police said. A man in his 50s was wounded in the shoulder during the shooting, which broke out after an argument between neighbours escalated.

In January 2010, a woman was stabbed near Earlscourt Park. From the Toronto Star:

A woman has been stabbed in the chest this evening in Toronto’s west-end.The stabbing, which happened moments before 6 p.m., took place near Spring Grove Ave. and St. Clair Ave. W. – blocks away from Earlscourt Park, police say.The 23-year-old victim was taken to Sunnybrook Hospital in serious condition. Police are still on-scene trying to determine what led to the attack.

Back to Earlscourt Security article