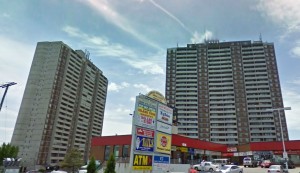 Humbermede, also known as Emery, is a Toronto neighbourhood that is located near the Humber River, as the name suggests. The neighbourhood’s boundaries are Finch Avenue in the north, Sheppard Avenue in the south, the Humber River in the west and Highway 400 in the east.The neighbourhood consists primarily of single-family homes, but there are also some high-rises in the area. Notable schools in the area include Emery Collegiate, Gulfstream Public School and St. Jude Catholic School.Nearby neighbourhoods include York University Heights in the east.

Analyzing crime in any particular area requires a great deal of information and critical thinking. While crime rates generally vary from region to region, for statistical purposes streets are often used as dividers to break up a neighbourhood. This can provide a guide as to which regions have more crimes than others, but it should not be taken as an absolute fact. Criminals do not stop at artificial neighbourhood or region boundaries. For example, living across the street from a region with a high rate of property crime could likely be safer than living directly in that region, but it doesn’t mean that criminals won’t cross the street to commit crimes from time-to-time.It is also important to take a look at the crime rates of neighbouring areas to give yourself a general overview and a point of comparison. Taking all of these factors into account will allow you to accurately judge the crime rates for a Toronto neighbourhood. Keep in mind that crime can take place at any time, even in the safest neighbourhood, so having a reliable home security system is incredibly important.Here are the Humbermede crime rates against people and property. All rates are per 1,000 living and working in the area.

In March 2012, a man was shot outside a banquet hall in the Humbermede/Emery area. From Global TV:

Police are searching for suspects after a man was shot outside a banquet hall in North York.Police were called to 800 Arrow Rd., in the Weston Rd and Finch Ave area, shortly after 2 a.m. Thursday. It is reported that the victim was leaving a dance when he was approached by an unknown group of males.

In October 2011, a man was stabbed in the chest in the Sheppard Avenue and Weston Road area. From City TV:

A man is recovering after he was stabbed in the chest near a nightclub in the Sheppard and Weston Road area Monday morning.The attack happened just before 3 a.m. at Rivalda Road, near Las Brisas del Mar nightclub. The victim, a 26-year-old man, was rushed to hospital with a single stab wound to the chest.His injuries are said to be non-life threatening. Police say the victim was approached by a group of men when he was leaving the club. He tried to run away, but later realized he had been stabbed.

In February 2011, a man was shot and killed near Weston Road and Finch Avenue. Also, from CityTV:

A 55-year-old man was declared dead on the scene after a shooting at 2400 Finch Avenue West, near Weston Rd., Tuesday night.The victim was reportedly shot in the chest at around 9:15pm. When paramedics arrived he was without vital signs and couldn’t be revived.

In September 2010, a man was shot in a robbery near Finch and Weston. From CTV:

A 24-year-old man was taken to hospital in stable condition Monday evening after an attempted robbery at a store near Finch Avenue and Weston Road.The shooting reportedly took place at a cellphone store where the victim is employed, in the 2500-block of Finch Avenue West.Police at 31 Division say one shot was fired and there are two male suspects. They say they don’t know which direction the suspects went when they fled the store. There is also no word whether they made off with anything. One of the suspects is presumed to be armed.

In February 2009, a student was stabbed near Emery Collegiate Institute. From the Toronto Star:

A male student was found stabbed in the neck near Emery Collegiate Institute in North York early this afternoon. Police responded to the call at around 12:30 p.m. They found the victim in a field near the school at Finch Ave. W. and Weston Rd. with wounds to the neck and lip.