Little India is a Toronto neighbourhood that is located along Gerrard Street East. The boundaries of this neighbourhood at Greenwood Avenue in the west and and Coxwell Avenue in the east. The area is one of the Toronto neighbourhoods with the most property crime.The region is named “Little India” due to the the many Indian, Pakistani, Bangladeshi, Afghan and Sri Lankan restaurants, cafés and stores in the area. The neighbourhood is sometimes known as the “Gerrard India Bazaar,” “Little Pakistan,” or “Little South Asia.” There are a number of events in the region that appeal to the different South Asian groups, including Diwali and Eid ul-Fitr festivals. The Festival of South Asia takes place in July each year in the neighbourhood. Gerrard Street is typically closed to traffic during the festival, but all businesses remain open as usual. 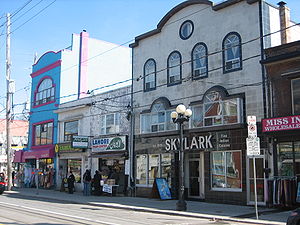 In July 2009, a shooting occurred in the Gerrard and Greenwood area. From the Toronto Star:

Police are looking for several suspects following a shooting in Toronto’s east end in which a gunman lost his firearm in the road when the car he was firing from hit a speed bump.No one was reported injured after residents heard about a dozen gunshots at a townhouse complex on Walpole Ave., near Gerrard St. E. and Greenwood Ave., just after 8 p.m.Two men were taken into custody when they were stopped by police as they walked along Monarch Park Ave. several blocks from the shooting. Numerous witnesses who were outside enjoying a mild summer evening watched as a group of people scattered when the gunfire broke out.

In July 2010, a man was stabbed near Coxwell and Gerrard. Also from the Toronto Star:

A man is recovering from a stab wound to the abdomen after a bar fight erupted in the city’s east end early Saturday.Police were called to Coxwell and Danforth Aves. around 2:30 a.m., where they found the 25-year-old victim suffering from the stab wound. Investigating officers says that the incident stemmed from an altercation at a bar near Coxwell Ave. and Gerrard St. E.