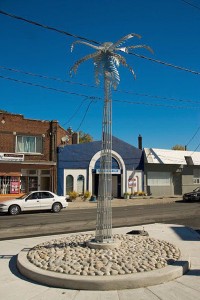 In December 2011, a robbery and swarming took place in the Oakwood and Vaughan Road area. From Toronto Police Service:

A 37 year old male reports that on December 12, 2011 at approximately 0300 hours he was walking with a friend in the area of Oakwood Avenue and Vaughan Road when he was approached by four male suspects. The suspects grabbed the victim, threw him to the ground and removed his wallet. The suspects then fled the scene in an unknown direction. The victim was rendered unconscious and sustained several injuries about his body and will seek his own medical attention.

In September 2011 police seized drugs and a gun from a man in the Eglinton and Oakwood Avenue area. From InsideToronto:

A man faces a dozen charges after police seized drugs and a gun in the Eglinton and Oakwood avenues area. Police allege officers conducted an undercover drug transaction with a man on Wednesday, Sept. 21. A suspect was arrested. Police allegedly seized drugs, cash and a handgun.

In August 2011, two people were stabbed in the Eglinton and Oakwood area. From CP24:

In May 2010, a man was shot and killed in the Oakwood–Vaughan neighbourhood. From City News:

Homicide detectives are investigating after a male was shot and killed in the west end Monday afternoon.Shortly after 3:30pm, emergency crews arrived at the scene on Winona Dr., near St. Clair and Vaughan avenues, and found a male with a bullet wound in the chest.The victim had no vital signs and was rushed to the trauma centre at St. Michael’s Hospital. Despite paramedics’ best efforts, he succumbed to his injuries.

A Security Cameras can be very useful in such of these situations. Safetech Security can help you providing you the best Security Integration for your family or business.Back to Oakwood–Vaughan article