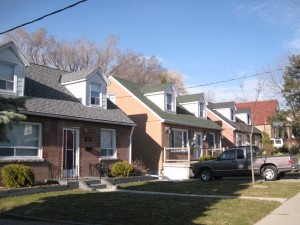 The three regions inside the O’Connor-Parkview neighbourhood each have their own characteristics and structure that separates them from one another. There are a wide variety of different structures within the neighbourhood, from high-rise buildings to smaller bungalows to two-storey houses.Here are the O’Connor-Parkview crime rates against people and property. All rates are per 1,000 living and working in the area.

In February 2011, a man was stabbed in the Woodbine Gardens area. From the Toronto Star:

A man is in hospital after being found with multiple stab wounds by police officers in Woodbine Gardens.Police responded to a call around 9:20 p.m. on Dawes Rd., north of Danforth Ave. and found a man who was reportedly stabbed several times in the back.

In October 2008, five people were stabbed in the St. Clair and O’Connor area. From CTV News:

A fight at a post-football-game party in East York left five people stabbed, including one critically wounded, in one of several violent incidents in Toronto overnight.The incident occurred at a home on Parkview Hill Crescent, which is in the St. Clair Avenue and O’Connor Drive area, at 10:20 p.m. Police say an uninvited guest showed up at the party.When officers arrived, they found five young men who had been stabbed. Some were high-school age, and others were slightly older.

In January 2008 a teenager was stabbed in the Parkview Hills area. From City TV:

Police received a call from a woman saying her friend had been stabbed in the stomach and they rushed to the Bermondsey Rd. and North Line Blvd. area at around 6 p.m. But once they arrived authorities couldn’t find the victim or the caller.Not long after the witness again spoke to a dispatcher and police redirected their focus to the Parkview Hill neighbourhood. The victim was then found lying on the sidewalk near corner of Northdale Blvd. and Denvale Rd.