Weston is a Toronto neighbourhood that is located within the former City of York. The neighbourhood’s boundaries include Highway 401 in the north, the Humber River in the west, Jane Street in the east and Eglinton Avenue in the south. Lawrence Avenue runs through the neighbourhood and the region’s core is based along that street.Weston was once an independent town (named “the Town of Weston”) before it became part of York and subsequently the City of Toronto. Due to this fact, there are many streets (such as Church Street, King Street and John Street) that are duplicates of street names in downtown Toronto.Weston is home to many small businesses and other services as well as a variety of single family homes, apartments and condominium towers. The area’s main shopping district is located just south of Lawrence Avenue, on Weston Road between Church Street and Wilby Crescent. The neighbourhood is also home to Cruickshank Park in the Humber River valley. 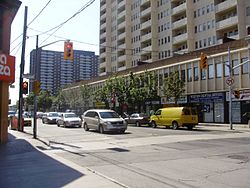 Like all Toronto neighbourhoods, there is crime in Weston. For the purposes of clarity, the crime rates are broken down by area, using streets in the neighbourhood as boundaries.However, it is important to recognize that criminals do not stop at predefined boundaries when they are looking to commit crimes. Therefore, it is important to focus on crime in the entire region (as well as crime in the surrounding Toronto neighbourhoods when trying to determine the level of crime in any specific area.Here are the rates of crime in Weston. All rates are measured per 1000 living and working in the region.

In March 2012, shots were fired in the Weston Road and Lawrence Avenue area. From the Toronto Star:

Police were called to 1 Hickory Tree Rd. near Weston Rd. and Lawrence Ave. W. at 3:20 a.m. Sunday after residents reported hearing five to eight shots.So far, police have found evidence of five shots to windows. There are no injuries reported.

In January 2012 a man was shot several times in the Weston Road and Highway 401 area. From the Toronto Star:

Police and the SIU are investigating after a man suffered multiple gunshot wounds at a North York plaza during a shooting involving Toronto police. The incident took place Friday afternoon at Crossroads Power Centre, a commercial plaza on Weston Rd. just south of Hwy. 401.Const. Wendy Drummond said police were called after reports of a person with a knife around 12:30 p.m. But no other details were available from police as the provincial Special Investigations Unit is now involved.An SIU forensics van was seen parked on Weston Rd. and at least a dozen police cruisers behind The Beer Store, which is attached to a Subway restaurant and Tim Hortons in the northwest corner of the plaza parking lot.

In September 2010, two people were killed in a shooting in the Weston Road and Lawrence area. From the Toronto Sun:

Two male victims were rushed to Sunnybrook hospital after shots rang out in front of a highrise apartment complex at 1765 Weston Rd., south of Lawrence Ave., shortly before 10:30 p.m.One victim was shot in the head and the other in the abdomen, Toronto Police Staff-Sgt. Mark Barkley told the Toronto Sun late last night.EMS staff confirmed one of males was pronounced dead, but did not specify which one. The second victim arrived at hospital in serious condition but died later from his injurues.

In May 2010 a woman was stabbed and killed in the Lawrence and Jane area. From City TV:

A woman believed to be in her early 30s was reportedly stabbed to death near Jane and Lawrence on Monday afternoon. Police rushed to an apartment at 15 Harding Avenue, where the victim was pronounced dead at the scene.Initial reports suggested the woman may have spent many hours with her paralyzed son in the apartment before anyone responded to the scene.